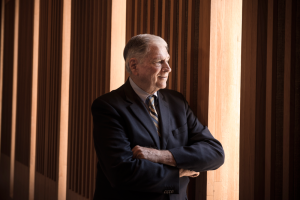 The Rev. William G. Enright of Indianapolis is a man of many gifts. Prophecy does not seem to be among them.

Here is someone who has spent the past 10 years and more engaging people of faith and faith communities in conversation about giving. But he laughs as he recalls a younger version of himself — a newly minted associate at a Presbyterian church in Chicago in the 1960s informing a church secretary that he wasn’t interested in talking about money.

“I told her, ‘That’s not my issue. God’s given me a higher calling. I don’t have to be concerned about money.’ I look back and see where I am now …”

Where he is now — and will be for a few more months — is head of the Lake Institute on Faith & Giving, part of the Lilly Family School of Philanthropy at Indiana University-Purdue University Indianapolis. By the time he leaves the job this summer (he will stay on as senior fellow), Enright will have spent more than a decade in one long discussion about what he calls “the big American taboo,” the intersection of religion and money.

Along the way, Enright has helped transform the conversation nationally about congregations, faith and giving. Bringing together experts in both pastoral ministry and academic research, Enright and the Lake Institute have fundamentally changed the way many local congregations think and talk about money.

Rather than being about internal church matters such as furnace repair and roofing estimates, “money talk” in those congregations is now about treasure — treasure that can strengthen religious commitments and create health, love and care for others in a hurting world.

To Enright, it all begins with a right understanding of philanthropy.

“I find the word ‘philanthropy’ to be interesting,” Enright said. “It means ‘love for humanity,’ but I put a different spin on it. It’s love for humanity, but it’s also giving for the flourishing of humanity. How do we help people all around us to become better and address what their basic needs are?”

Enright didn’t develop that kind of thinking solely at the Lake Institute but brought much of it with him when he made the transition from the pulpit. From 1981 to 2004, he was pastor of Second Presbyterian Church, an imposing structure in a well-heeled neighborhood often described as “Indianapolis’ Protestant cathedral.”

As pastor, Enright often broached the money-church taboo, teaching giving as fundamental to Christian joy and molding the congregation into one that “wraps its arms around the city,” said Craig Dykstra, a former parishioner.

“He was never shy about talking about the relationship between faith and money, but it rarely had much to do with pleas for funding the congregation,” said Dykstra, former senior vice president for religion at Lilly Endowment Inc. and now research professor of practical theology at Duke Divinity School and senior fellow at Leadership Education at Duke Divinity.

Generosity and the Christian life

Instead, Enright maintained that the relationship between faith and money was ultimately an issue of pastoral care, Dykstra said. To Enright, generosity and giving build on gratitude to God for God’s benevolence, which in turn prompts a sense of responsibility for the well-being of the city and the neighbor.

“To Bill, generosity and giving is the constituent dimension of the Christian life,” Dykstra said.

If so, then why have church people been so unwilling to talk about money? Where does the taboo come from?

Enright links it to the rise in the 20th century of the word “stewardship” as a euphemism for “fundraising” by people looking for a way to discuss money without actually using the word.

“Unfortunately, stewardship really has nothing to do with fundraising,” Enright said. “It’s about being a faithful manager of the resources and possessions with which we have been blessed and we have been given. We corrupted the word ‘stewardship,’ and it became a synonym for ‘fundraising.’”

As a result, at least in the Protestant tradition, the only time the pastor talked about money was in the annual stewardship sermon, which was part of the congregation’s annual fundraising effort.

The irony for Christians, Enright said, is that Jesus had more to say about money than any other subject.

“And that’s New Testament scholars who say that,” Enright said. “Faithful use of possessions and the kingdom of God are the two subjects that he spoke about most frequently. So the question that we ask is, Where did this get lost in the Christian tradition? Why did that get neglected when it was so central?”

As part of the broader Lilly Family School of Philanthropy, the Lake Institute works to answer those and other questions, helping clergy and other faith leaders think differently and talk openly and honestly about the relationship between faith and money.

“One of the principles we use in working with clergy is that you have to learn to talk about faith and giving with integrity,” Enright said. “Don’t dodge the lectionary, the text, when it deals with that, because it deals with that frequently. But separate your teaching on the faithful use of possessions from your fundraising.”

Established in 2003 — with Enright becoming its first full-time director in 2004 — the Lake Institute explores the relationship between faith and giving across various religious traditions, offering classes and programs for faith leaders, fundraisers and others. The institute’s mission is “to foster a greater understanding of the ways in which faith both inspires and informs giving by providing knowledge, education, and training.”

Enright compared the institute’s courses and seminars to a trip to the doctor for the participants. But rather than providing a diagnosis and a prescription, the institute gives its “patients” the tools with which to make their own diagnoses.

Toward that end, the institute last year began offering an executive certificate in religious fundraising, an intensive training program for clergy leaders. Still in its pilot stages, the program is offered in partnership with various seminaries and colleges around the country. Two sessions were offered in 2013, and another seven are scheduled for 2014, all with waiting lists.