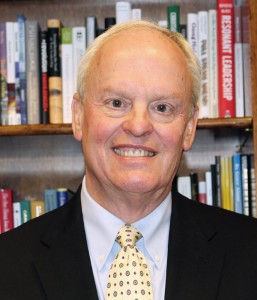 The Reformed Church in America has been undergoing a culture shift. Staff is more empowered, more able and ready to function as leaders no matter where they are in the organization, said Ken Eriks, director of congregational mission for the denomination.

Part of that culture shift has involved a significant investment in leadership training, particularly for younger and newer members of the staff. During the past five years, the RCA has sent 17 people to participate in Leadership Education at Duke Divinity’s signature programs, Foundations of Christian Leadership and Denominational Leadership.

Eriks estimates that’s about 20 percent of the organization, making the RCA the denomination with the largest percentage of Leadership Education alums.

Although many factors have contributed to the culture shift, the new attitude at the RCA is “very consistent with the training, the equipping of the folks who go to [Leadership Education],” he said.

“It’s not leadership in a vacuum. It’s leadership in an institution from a Christian perspective,” said Eriks, who officially nominates RCA staff for admission to the programs.

“Some of our folks came out of the nonprofit world. Some out of the local congregation. In both cases, rethinking what leadership looks like within an institution has been valuable,” he said.

Eriks said alums have benefited from the biblical, theological framing of the importance of institutions and God’s role in institutions – a philosophy that differentiates the programs from other leadership courses, Eriks said.

“Foundations of Christian Leadership addresses what it means to lead in an institution, and Denominational Leadership has even a more specific focus yet. Not just any institution — a denomination,” he said.

“It’s a good way to invest in staff and help them early on to identify strengths and growing edges. They have the opportunity to learn about leadership and then some structured ways to work on their own leadership.”

Among the changes Eriks has seen: an employee who helped create a new position and another who navigated a difficult personnel issue.

“Her work at Duke helped her think through and function better in a very tough situation,” Eriks said. “We have many of those stories.”

It has helped the individuals grow and ultimately has further the RCA’s mission, he said: “That’s at the heart of it.”

Join a learning community to engage in self-discovery and take part in experiences and activities from multiple disciplines such as the arts, nature and theology that will help you become a transformative leader of your Christian institution.